A Proper Screening
Could Save Your Life

Did you know that oral cancer steals the life of one American every hour? We don't hear much about oral cancer, but 30,000 patients will be diagnosed this year. Only half of patients diagnosed with oral cancer will survive longer than five years. Because it is often detected in the later stages, oral cancer's mortality rate is higher than that of cervical cancer, Hodgkin's disease, brain, liver, kidney, or ovarian cancer. Treatment for oral cancer often causes disfigurement and lessens the patient's quality of life. Learn more about early detection through Velscope oral cancer screenings in Randolph, NJ.

How Does
Velscope® Work? 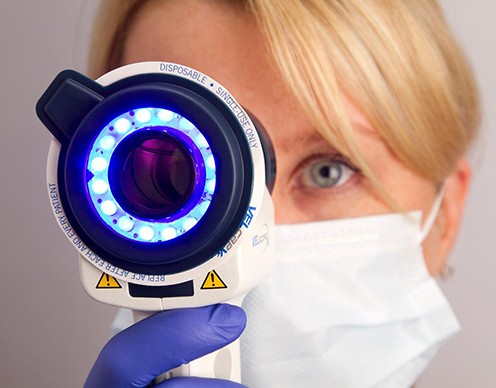 Thanks to an amazing new technology called Velscope, dentists and hygienists can quickly and painlessly screen for oral cancer. Velscope is an identification and marking system that detects tissue abnormalities and is used in combination with traditional visual exams.

One-fourth of all oral cancer victims are non-smokers, don't drink, and have no lifestyle factors to heighten their oral cancer risk. As a result, it has become more important than ever that all adults have an annual exam. Men over 40 are the most prone to the disease, although the number of women with oral cancer has risen in recent years, due to the increased number of women smokers. Patients with lifestyle risks, including any tobacco use, daily alcohol consumption, viral infections, autoimmune deficiencies like HIV, and diabetes, may need more frequent evaluations.

What is the Velscope® Process? 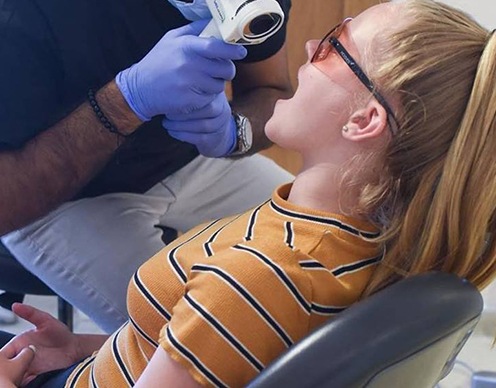 The process is simple. Your dentist dims the overhead lights and examines your mouth using the Velscope. If the Velscope finds a problem area, the spot will become illuminated and appear distinctly different from the surrounding normal tissue. If we see a suspicious area, we can photograph it for future comparison or, if need be, take a very simple brush biopsy and send it in for evaluation.

While all of this information sounds disheartening, if oral cancer is found and treated in the early stages the condition has an 80 to 90-percent cure rate.